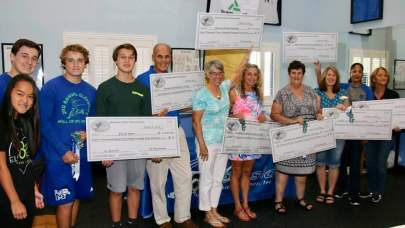 STUART, FL, August 23, 2018 - The 2018 Marathon of the Treasure Coast season concluded tonight with the presentation of the event’s fundraising proceeds to its eight participating charities. Competitors, sponsors and volunteers joined forces to present these charities with a total of $45,000 in contributions. Now entering its sixth year, The Marathon’s philanthropic efforts have raised a cumulative total of $144,000 for local programs.

The Marathon’s Philanthropy Team, led by Michelle Schincariol, presented awards to the following organizations: Diabetes Research Institute, YMCA of the Treasure Coast, Florida Oceanographic Society, Helping People Succeed, M.E.’s Team, Elev8Hope, Council on Aging of Martin County and Boy Scout Troop 888. “Charities that participate in The Marathon of the Treasure Coast are provided a platform from which to raise awareness, coupled with financial support from sponsors and competitors as well as from their own efforts,” commented Michelle Schincariol. “Charities can provide volunteers, and/or register relay teams for The Marathon, providing additional awareness and support for their own cause.”

A kickoff reception for the 2019 Marathon was hosted by Bryan Graham, MPT at his business, Oceanside Physical Therapy. Immediately following the reception, runners joined a Fun Run sponsored by Fleet Feet, with sponsorship from On Running, Feetures and NATHAN Performance Gear. Oceanside Physical Therapy and Fleet Feet are ongoing, valued supporters of The Marathon and its charities.

The 2019 Marathon of the Treasure Coast will be held on March 3, 2019 with many events leading up to the big race. To learn more about this event, its charities and sponsors, visit www.treasurecoastmarathon.com. 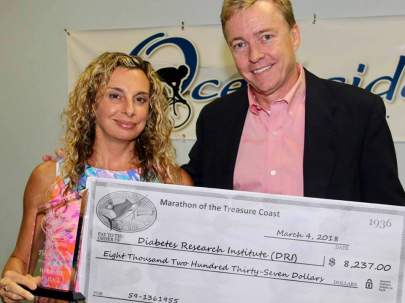 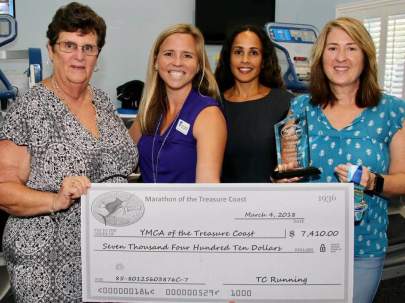 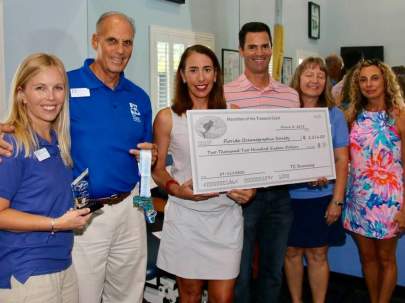 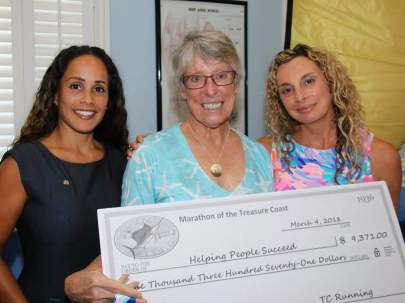 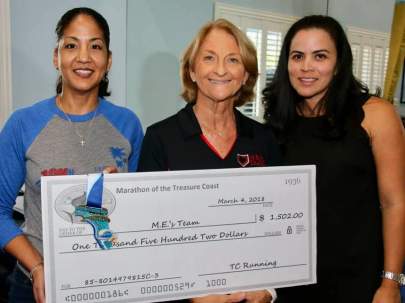 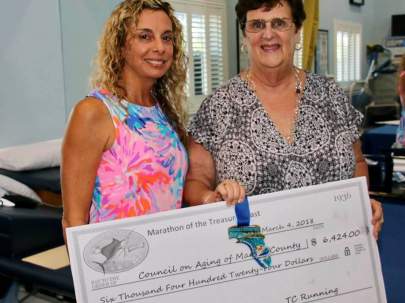 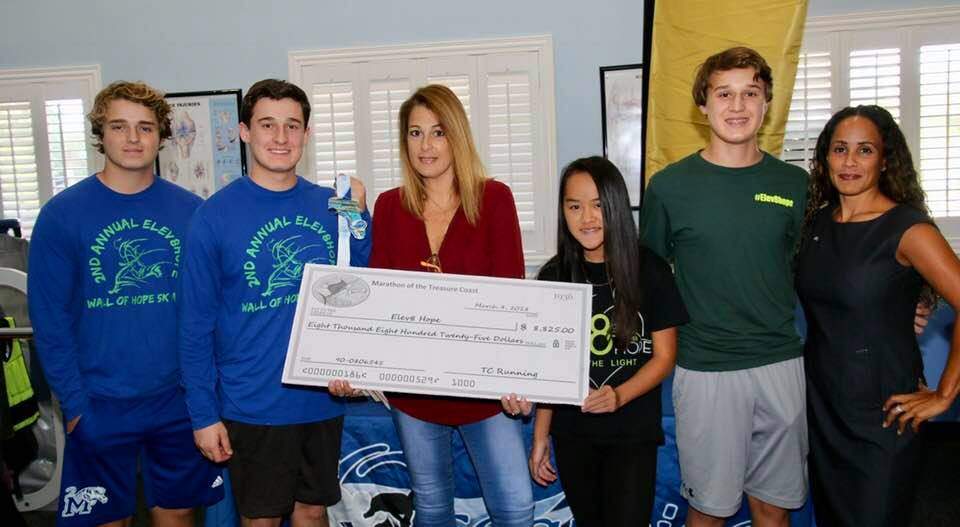 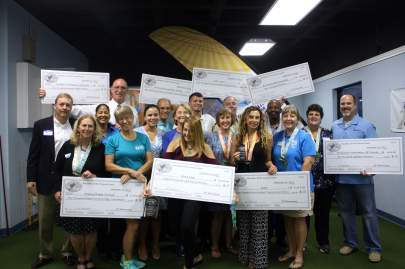 The 2017 Treasure Coast Marathon was a success for the competitors and the charities that participated and raised money for their organizations. Michelle Schincariol headed up the Philanthropy Committee and commented that, “The Treasure Coast Marathon is a non-profit organization as well and we welcome the additional support, awareness building and spirit of the local charities who join our event.”

A kickoff for the 2018 Marathon and the distribution of checks to nine organizations was hosted by Bryan Graham, MPT at his business, Oceanside Physical Therapy. Elev8Hope was awarded $8,003 and the trophy for top fundraiser. Juvenile Diabetes Research Foundation placed second with $3,127 followed by Helping People Succeed who raised $1,852.

Other successful participants were: Florida Oceanographic Society; Children’s Emergency Resources; Alzheimer’s Association; CareNet; and M.E.’s Team. Boy Scouts Troop 836 was instrumental in helping with activities during the weekend and was given a $1,000 donation in recognition.

Frank Fender, Marathon founder, stated that $84,598 has been raised since the inception of the Marathon in 2014. 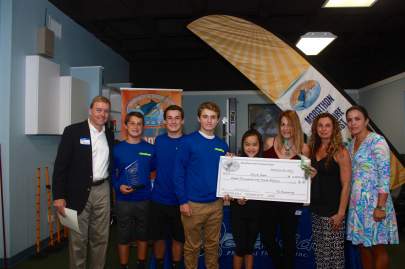 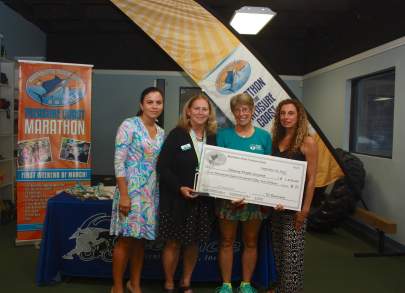 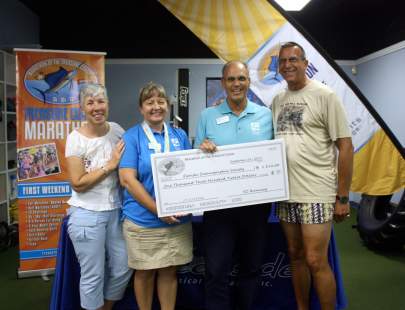 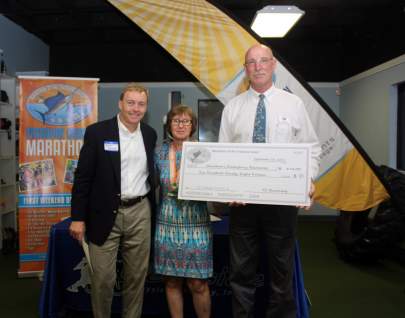 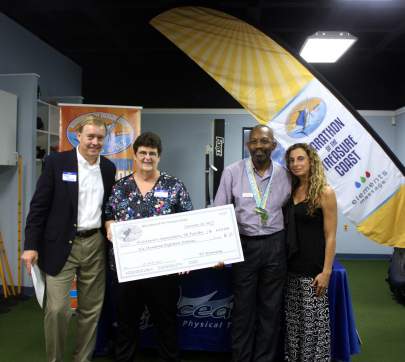 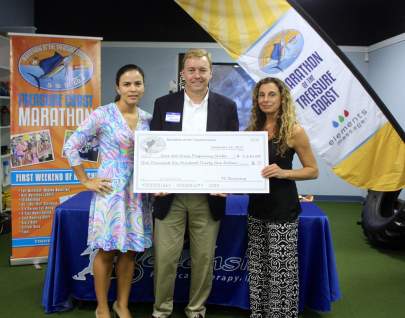 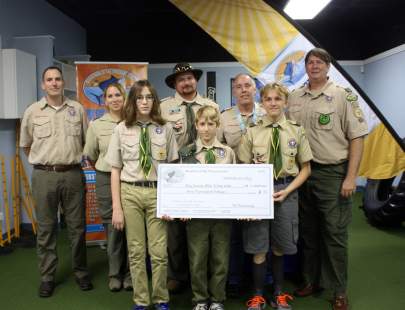 Stuart, FL --In just four short years the Treasure Coast Marathon has gone from being an enthusiastic dream to a reality with more than 1,500 runners expected this year. The marathon will be held on Sunday, March 5 beginning and ending in Memorial Park in downtown Stuart. Activities begin on Friday, March 3, 2017.
The marathon attracted 600 runners in its first year and by 2016 had over 1,100 runners from 30 states and six countries. An exciting addition for 2017 is the addition of the Marriott Hutchinson Island resort as the host hotel and the site of the marathon exposition, making this event even more appealing as a destination race. The 26.2-mile course is a spectacular route through charming downtown Stuart, beautiful residential neighborhoods, with wide vistas over the water and an ocean coastal route on Hutchinson Island. It’s the perfect escape from winter weather while competing in one of the best sports around.
There is plenty to do and see while on the Treasure Coast and its core staff of volunteers, headed by Race Director Jeanne Brower, have been busy planning and working for the past year to insure that runners and spectators will have a great time. A multitude of running, walking and fundraising events will be held during the weekend including a full and half marathon, a 5k, an option to compete as a two to four person relay race team, the children’s race and a music festival (Marathon Rock and Run).
For a complete list of race activities, registration forms and sponsorship information, please visit www.treasurecoastmarathon.com
A community-wide benefit of the Marathon is the Run for Charity. Since its inaugural year, giving back to the community has been an integral part of the mission of the Marathon of the Treasure Coast. This year 12 charities are participating in the Run for Charity: YMCA of the Treasure Coast; Epilepsy Foundation of Florida; Helping People Succeed; Alzheimer’s Association; Voices for Children of Okeechobee and Treasure Coast; Suncoast Mental Health Center; M.E.’s Team Foundation; Florida Oceanographic Society; Elev8Hope, Inc.; Children’s Emergency Resources; CareNet; and JDRF. Over the past three years, $63,640 has been raised for charity.
Well-known music promoter Ron Hart, who owns Terra Fermata, the downtown outdoor entertainment mecca, is once again organizing the Marathon Rock and Run music festival. The entertainment kicks off Friday, March 3 at 6 p.m. at Terra Fermata (26 SE 6th Street, Stuart, FL) and continues on Saturday from 10 a.m. to 5 p.m. at the Runners’ Expo at the Marriott Hutchinson Island Resort. A pre-race pasta party, catered by Luna Pizza, will be held Saturday evening at Terra Fermata with an evening of music to follow. There will be two shows on Sunday: in the morning at Memorial Park and later from 4 p.m. to 10 p.m. at Terra Fermata. Tickets are available at http://holdmyticket.com/event.264603.
Sponsors of the Marathon of the Treasure Coast are local and national in scope. Their financial and in-kind support are essential to the success of this fun, healthy, community-inclusive event.
The signature sponsor is Elements Massage, a new business owned by Matt and Elizabeth Ragland and located next to LA Fitness in Jensen Beach. Executive sponsors are: Oceanside Physical Therapy, Inc. and SunTrust. Platinum sponsors are: Ackerman; BBT; Teleperformance; Peter W. Weiler, CFP; and Wallace Volkswagen. Gold sponsors are: GEICO of the Treasure Coast; Mark Brechbill, CPA.; Martin Health System; and Moe’s Southwest Grill. The silver sponsor is Garden of Life. Sponsors are listed as of February 1, 2017. 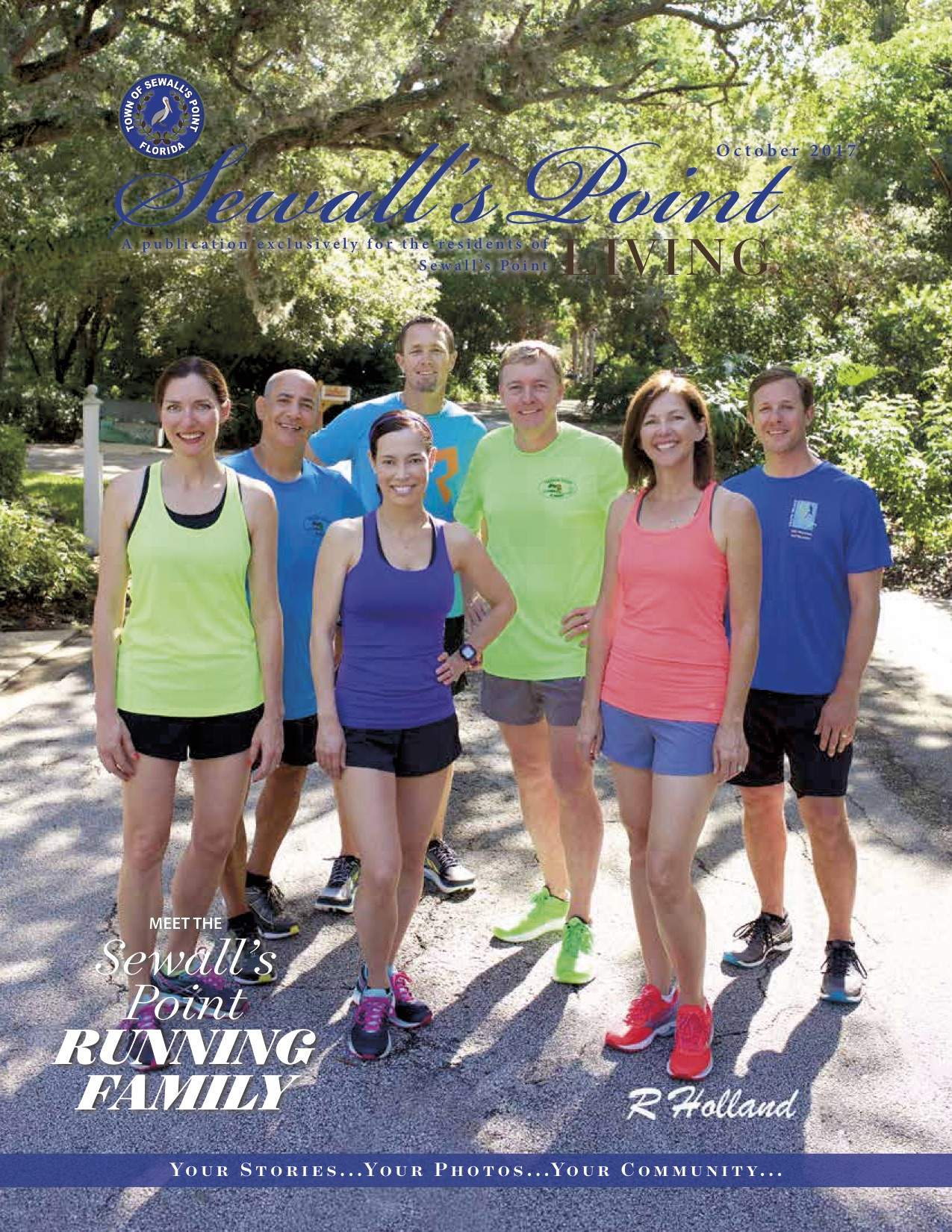 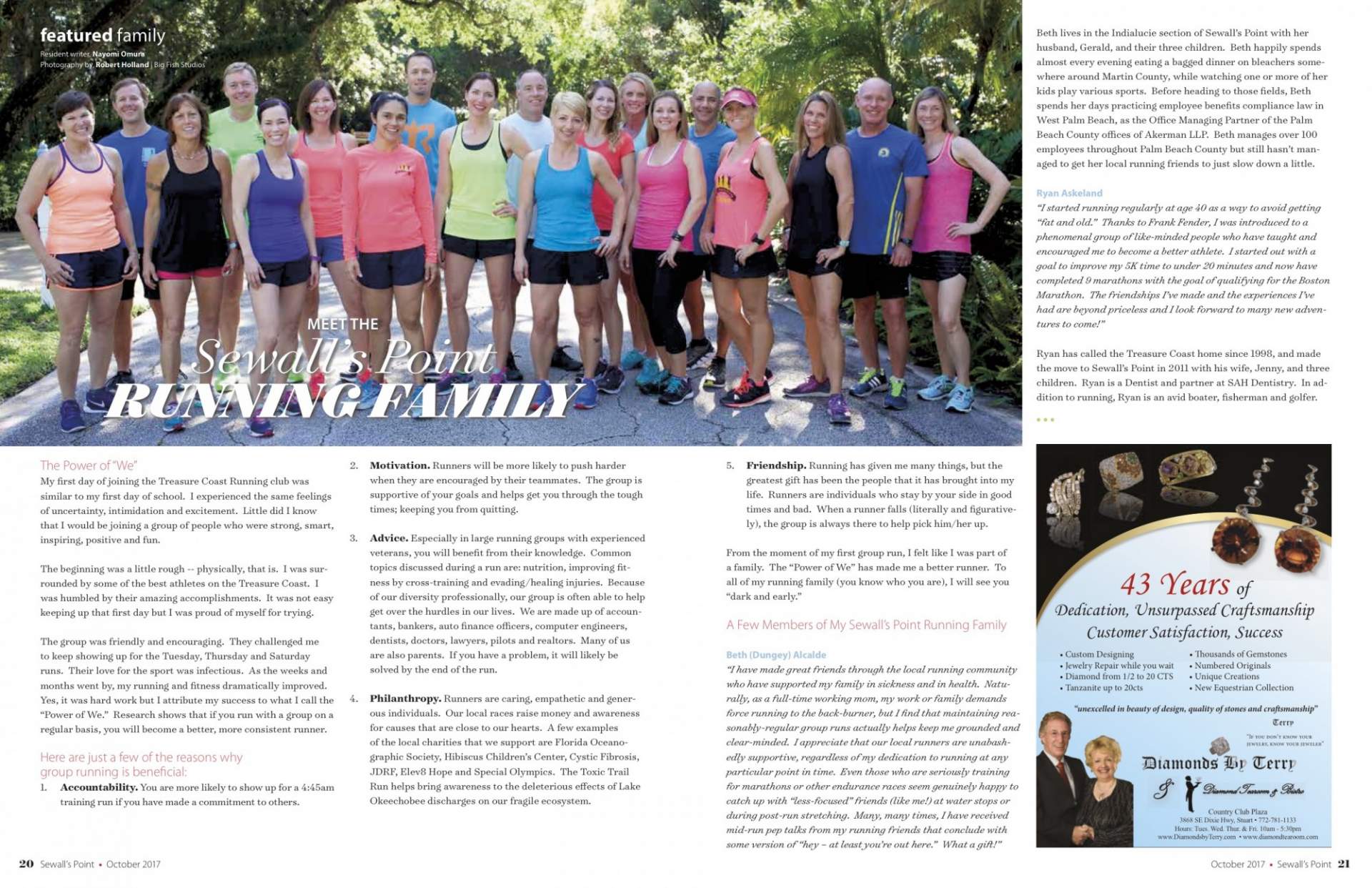 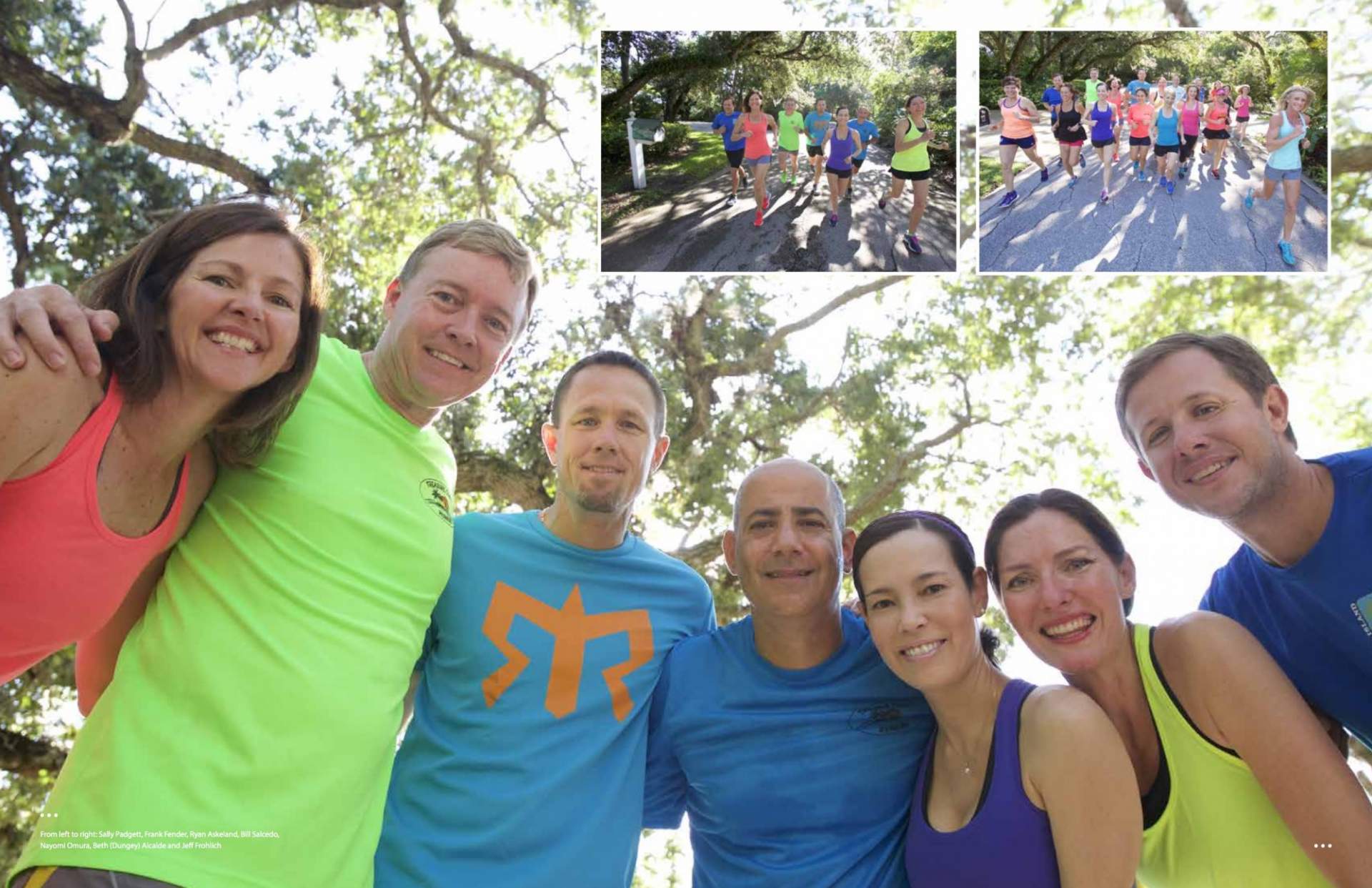 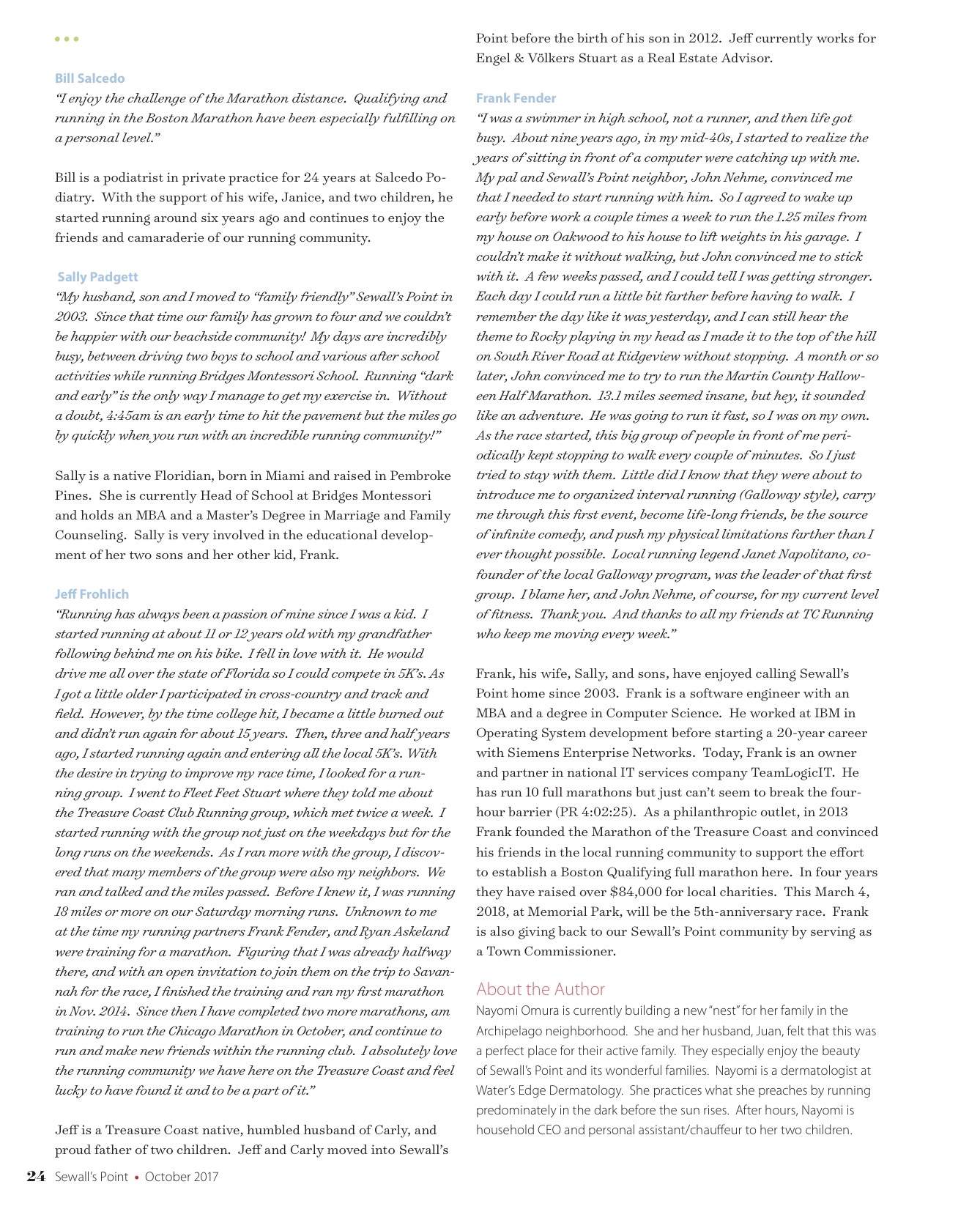